Day Trip to Teotihuacan Without a Tour 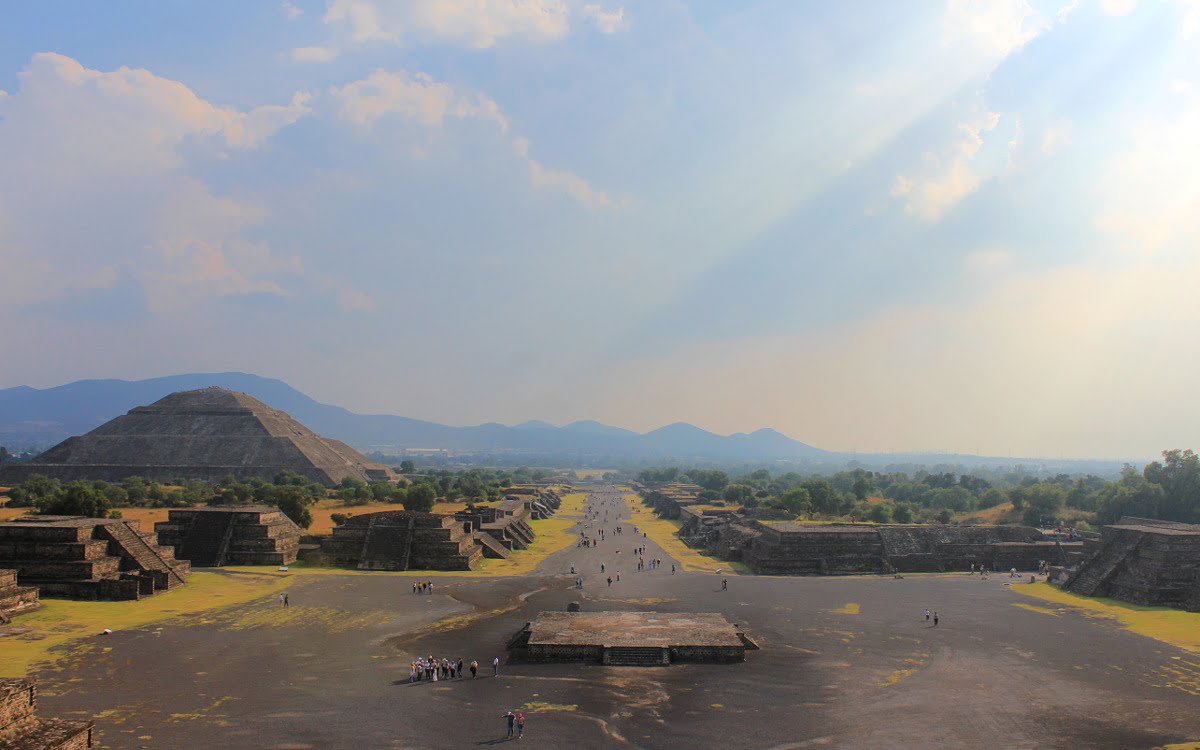 Are you planning to visit Teotihuacan from Mexico City? Here’s how you can do a day trip to Teotihuacan without a tour.

Teotihuacan is one of the most famous tourist destinations in Mexico – and it’s only 40 kilometers away from Mexico City. Therefore it’s very easy do a day trip to Teotihuacan without a tour.

Here’s what you need to know about visiting the Pyramids of Sun and Moon from Mexico City.

The Pyramid of the Sun is the most famous landmark in Teotihuacan. Fun fact: it was originally painted red.

What is this Teotihuacan, anyway?

The city of Teotihuacan was first established over two thousand years ago. At its peak, the Teotihuacan had over a 100,000 residents, making it one of the largest cities of its time. The city collapsed on the 7th or 8th century – possibly due to internal conflicts.

The Aztects named the main avenue of Teotihuacan “Avenue of the Dead”. They thought its buildings were tombs made by giants.

Wrong! The Aztecs did, however, discover the place long after it had been abandoned. As a result, the Aztecs took lots of influences from Teotihuacan.

The Aztects also came to the conclusion that the gods created the universe on this spot. The name Teotihuacan comes from an Aztec word for “place where gods are born”.

If it wasn’t the Aztecs, who built the Teotihuacan, then?

No one really knows! The ethnicity of Teotihuacans is still being debated.

The smog over Mexico City creates a beautiful backdrop for a sunset photo during a Teotihuacan visit.

Okay, enough about the history. Is it possible to visit Teotihuacan on a day trip from Mexico City?

Yes, absolutely! And it’s very easy to get to Teotihuacan. Buses from the northern bus station (Central de Autobuses del Norte) leave every 20 minutes or so, and the bus ride takes just an hour. Once in Teotihuacan, you can see the major sights of the complex in 3-5 hours.

The Pyramid of the Moon is not as huge as its brother, but it’s still very impressive.

How do I get on the bus from Mexico City to Teotihuacan?

After entering the northern bus station via the main entrance, head left and walk almost to the end of the left-curving corridor. Buy your ticket from the “Autobuses Teotihuacan” stand and head to the bus via gate 8.

The ticket to Teotihuacan is only valid at a specific time, but you can take any bus on your way back. A round trip for your Teotihuacan visit costs 100 pesos (4.5 €). There’s no toilet in the bus.

Climbing on top of the Pyramid of the Sun is very tiring, but you can always blame the altitude. The elevation of Teotihuacan is 2,300 meters!

What should I do on a day trip to Teotihuacan without a tour?

The (literally) biggest sight is the Pyramid of the Sun, which is the third largest pyramid in the world. Climbing up to the 65-meter-high pyramid is exhausting but worth it! For the best views of the site, I also recommend climbing to the lower platform of the Pyramid of the Moon.

Besides the pyramids, there are several other ruins in the area during your Teotihuacan visit. Many of these feature interesting murals that are worth checking out. You can also visit the museums of Teotihuacan during your day trip.

Teotihuacan is a large complex. Prepare to walk several kilometers during your Teotihuacan visit.

Any other tips for visiting a Teotihuacan day trip without a tour?

It can be very hot and sunny, so drink lots of water and protect yourself from the sun. There’s very little shade available, so you might even want to take an umbrella with you for your Teotihuacan visit!

(At least that’s what I did, although I was the only tourist who had one.)

Do I need to pack my own meal for Teotihuacan day trip from Mexico City?

Not necessarily. There are dozens of restaurants available in Teotihuacan, although the fanciest ones like like La Gruta can be quite pricey.

La Gruta is an expensive restaurant, but it’s located inside a cave, making it a great escape from the scorching sun.

How much does it cost to visit Teotihuacan on a day trip without a tour?

Not much. The bus rides cost a hundred pesos and the entrance fee is 70 pesos (3.1 €), but that’s about it. In total, a day trip to Teotihuacan costs 170 pesos (7.7 euros) plus whatever you pay for the food and the local transport in Mexico City.

Is a Teotihuacan visit worth it?

Yes, I think it is. Even if you’ve seen dozens of ancient ruins already, the scale of the pyramids is very mesmerizing.

Thank you for the information! I still have one question, though.

If nobody knows who built the pyramids, could it be ancient aliens?

Come on, you can’t be so sure about that!

Yes I can. This conversation is over.

“There’s nothing extraterrestrial about Teotihuacan.”

Mexico City – Why I Took a Break from Traveling

I finally took a longer break from traveling. I’ve been in Mexico City for over three weeks already, and it’s been great.

The Voting Is Over – I'm Going to Africa!

Last weekend I let you vote for my next RTW destination from two options. Here are the results: Africa (South Africa to Kenya): 70 votes…